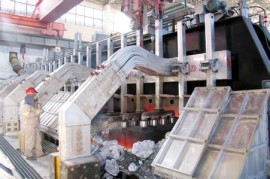 Since September, the international prices have tumbled 24%, LME three-month aluminum fell to their lowest level in six years, and since the beginning of aluminum in the decline of the premium to three and a half years to the lowest level, which makes aluminum producers profitability is facing the biggest challenge since the 2008 financial crisis.

Wood Mackenzie, according to data released if including premium prices $1800 a tonne, outside China for more than 10% of the aluminum smelting capacity (approximately 3.5 million tonnes) is at a loss state, on Friday, three-month aluminum at $1621 a tonne, while the aluminum premiums for $175 a tonne.

The data also highlights the aluminum production industry of China’s aluminium capacity to expand further and further increases in exports of anxiety.

INTL Ed, an analyst with fc stone Meir said, if you want to influence prices, producers choose only one: that is to cut about 100-2 million tons annual production capacity of aluminum.

“Quite a few of western aluminium producers have cut production, but the overall is still not enough, the number of GuoChanShang output far beyond that level.”