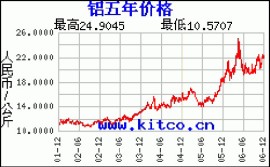 In the first half of the complicated international economic environment and under the condition of domestic economic downward pressure is bigger, production of non-ferrous metals industry in China to keep smooth running in the overall situation.