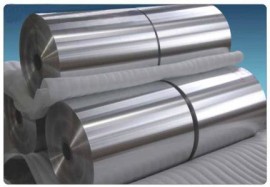 With the metal in the aluminum foil is a kind of aluminum rolling into thin slices of hot stamping material directly, the hot stamping effect is similar to the effect of silver foil stamping, so also known as fake silver foil. As a result of the aluminum is soft, good ductility, has a silver sheen, if the sheets after rolling, with sodium silicate materials such as aluminum foil on the offset paper made of paper mounted, also can be printed. But easy oxidation of aluminum foil itself and a dark, friction, touch can rub off, therefore not suitable for long-term preservation of books and periodicals cover, hot stamping. Aluminum foil can be divided by thickness difference thick foil, single zero foil and double zero foil.