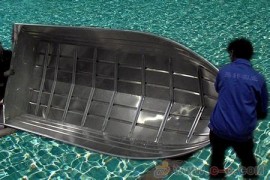 Japan’s civilian ships manufacture, the more aluminum, the aluminum used in the world. To 1945 years ago in Japan on the vessels of the bridge and superstructure with a large amount of aluminum, mainly is 2 ~ 4 mm plate and extruded section, after the second world war, the application of aluminum in civil ship dominant, and of course coast guard patrol boats and boat too much is made of aluminum alloy, such as the 1954 made the 15 “wind” patrol craft.

Japan since 1950 made of aluminum alloy civilian vessels, from the fishing boat, ferry and cruise to ocean giant cruise ships.

In the 1960 s was a period of high-speed continuous development of the Japanese economy, centering on the seto inland sea shipping appear unusually busy, in order to adapt to the needs of transportation, the seto inland sea and the kansai region of the shipyard to make a batch of another batch of aluminum alloy passenger ship, this is the first wave of Japanese manufacturing aluminum alloy passenger ship, later due to the rapid development of the aviation industry, air transportation network high speed quickly, the water traffic is affected, aluminum alloy construction of the ship in the trough, since the 80 s, built due to the need of economic power, high speed unanimously called for maritime traffic, aluminum alloy ship ushered in the second climax, welding technology has great development at the same time, and some have good weldability and corrosion resistance of aluminum alloy. Aluminium ship refers to the hull is made of aluminum alloy board or extrusion materials, and the superstructure and the internal equipment with the aluminum alloy parts with as many as possible. Launching in 1995 of 1995 power manager asha type large high speed ferries “hayabusa” is built in this period, a representative of the aluminum alloy liner, a landmark.

Japan’s construction in the new world of high technology of super water spray aluminum alloy as shown in the figure below, divided into two layers: the upper hull length 72.0 m, 37.0 m wide; The lower hull length 85.0 m; Wing propulsion draft depth is 9.6 m, the draft at water depth of 14.0 m. The liner has two kinds: type A (pictured above), the total length of 127 m, 27.2 m wide, designed for the slender; F type (below), wide flat shape design. This kind of super high-speed liner is made of aluminum alloy.

Aluminum alloy high-speed passenger ship is refers to the speed is more than 46 km/h, the quality of the aluminium alloy hull is about 50% lighter than steel. In Japan in 2013, about 2100 ordinary cruise ships, accounted for about 32% of aluminum alloy, in about 350 high-speed cruise ships, aluminum boat accounted for 74%, or about 259. Cruise is the development trend of high speed and large scale. Currently the world’s largest cruise is 220 kt ocean oasis, built in the United States. Large cruise/cruise into the application of aluminum alloy has opened up a new bright spot.