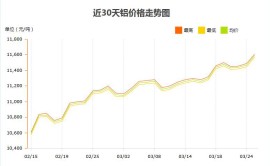 The bluffs overlooking non-ferrous metal prices fell, domestic non-ferrous metal smelting enterprises profit significantly worse. Since 2012, China’s aluminum smelting industry has been three consecutive years of losses, and the percentage of loss-incurring enterprises continue to expand, increasing the overall losses. According to estimates, the average tax electrolytic aluminum industry in China is completely cost about 12000 yuan/ton, the average tax cash costs about 10300 yuan/ton, namely under the current aluminum prices, there are still most of the companies are losing money.

“Because of the non-ferrous metal prices fell across and far below the cost line and the major force of smelting enterprises have to adopt measures to slash output, to cope with difficulties.” Industrial and commercial bank of China investment banking research center, said analyst Luo Rongjin in non-ferrous metal smelting enterprises resolve the pressure of excess production capacity unprecedented increase, the electrolytic aluminium industry.

“In this context, electrolytic aluminum industry to break through in trouble, on the supply side, only contraction capacity.” Army of China nonferrous metals industry association, vice President of literature, on the one hand, encourage uncompetitive enterprises to withdraw from the market; On the other hand, guide enterprises adopt flexible production.

“In the current situation, the enterprise is both necessary and feasible to flexible production.” Literature army said in an interview with reporters, this is an effective measure to cope with non-ferrous metal prices continued to fall, is also leading aluminium prices to return to the right direction, to promote the industry onto the road of healthy and sustainable development is the inevitable choice.

From the point of necessity, by elastic production, not only can reduce liquidity demand, reducing the loss of cash flow, can also reduce the enterprise’s fund pressure; From the Angle of economy and rationality, appropriate scale (e.g., 15% and 30% of the total output of electrolytic aluminum can) production will not bring the current unit cost. Because modest reduction compared with full capacity, the highest proportion of raw materials and power unit cost of the basic no change, finance charges because of liquidity to reduce also basically remain unchanged, the rise of artificial cost and depreciation cost can be controlled in 60 yuan/ton or so commonly, this has to do with the current production 1 tons of electrolytic aluminum loss compared to the size of the little cut loss-mitigation effect is significant.

At the same time, from the point of market demand, electrolytic aluminium consumption outlook remains positive. In “15” to “twelfth five-year” period, the rapid advance of industrialization and urbanization in our country, showed a trend of accelerated growth of demand for aluminum, aluminum consumption slowed sharply over the same period GDP growth level. Enter “much starker choices-and graver consequences-in”, China’s economy on late industrialization, aluminum consumption growth slowdown trend. But in the meantime, aluminum consumption growth is still in the high level compared with other countries. In addition, because aluminum consumption in China starts late, the accumulation of aluminum “base” is still very thin, and use the only equivalent to 1/10 of the us, per capita stock level is lower. Compared with the developed countries, the breadth and depth of China’s aluminium application have very big development space.

It is worth noting that under the effect of various factors, at present there have been signs of electrolytic aluminium industry. According to a January 2016 at the monthly aluminium smelting industry climate index, according to a report in January 2016, at the aluminum electrolysis industry leading synthetic index is 65.79, get rid of the declining trend. Despite LME prices compared with the big decline, but from the point of sequential, in January 2016 and December 2015 compared to the price flat, and SHFE prices after a sustained recovery in December 2015, in January 2016, basic in 10600 yuan/ton, 10800 yuan/ton range.