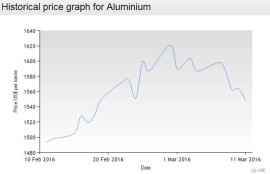 Analysts said this round of price increases reasons include China’s real estate market is improving and investors think 2015 metal has been oversold, etc.

But some analysts say, even a decline in metal prices have hit a recent round of cycle low, are unlikely to return to the glory of our past.

ANZ Bank (ANZ Bank) analyst Daniel Hynes said that the excess supply will curb prices, so is unlikely to see hitting a high of the previous cycle. Even after the recent rise, he said, the current price of the metal is still far lower than in the past five to six years of cyclical highs.

In the last five years ago metal prices cyclical boom is driven by China’s huge demand.

Goldman sachs said in a report, metal prices now if you want to continue to rebound, China needs two things: one is the government needs to expand credit, and the other is a real estate sales growth.

Goldman sachs predicts that the Chinese government will not take long-term low interest rates to stimulate the economy. The bank said, China’s debt accounted for the proportion of gross domestic product (GDP) is already high and rising, at the same time, in the coming year and the new development built building dish is likely to continue to maintain a weakness.

Metal the fragile nature of the recent rally to emerge: on Tuesday February in China import and export data, weak base metals such as copper, zinc and nickel dropped sharply. February dollar-denominated Chinese exports fell 25.4% year on year, a 13.8% drop in imports.

Hynes said better-than-expected data shows that the basis of metal commodities market is turning a corner, may no longer see the cyclical lows of earlier this year.

Iron ore and steel prices fell on Tuesday with a day after contrast to rise sharply. The rise in prices is due to the Chinese government over the weekend at a meeting of the National People’s Congress promises to solve such as steel industry overcapacity problem, such measures would reduce supply, pushing up prices.