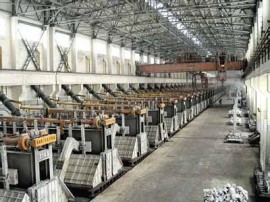 Alumina is the main raw material of aluminum, so refineries typically sell the alumina to aluminum smelters. Aluminium is widely used in many areas from cars to cooking utensils.
China is the world‘s largest aluminum consumer and producer. Weaker aluminum prices could boost China‘s aluminum production and curb import demand. Alumina is usually accounted for 40% of primary aluminum production costs.
According to the smelters, sources said, China spot alumina price this week about 2,350 to 2,550 Yuan per ton, lower than the January price of about 2,800 Yuan. Traders said, the prices are lower than approximately 2,550–2,650 Yuan in import duty-paid prices of alumina.
This month, a sale to China‘s alumina spot price of us $ 347 per tonne of cargo, in April for more than $ 350.
In contrast, Shanghai aluminum prices since January on Thursday and low point this year of more than 1%, to 12,785 Yuan, limited by the large smelter spot supporting sales initiatives.
“Import costs this year has been higher than the domestic alumina prices, most imports are about,“ trading Manager for a State-owned aluminium smelter said, because they were not authorized to comment to the media, he refused to be named.
2015 1 – April, China alumina imports representing a drop of 40%.
The business manager said, because of the decline in coal and electricity prices, with many falling production costs of alumina refineries. He estimated the current cost of production of about 1,600 to 2,300 yuan per tonne.
Futures companies, analysts say 2014 fell 200 yuan in the fourth quarter, as profits increase capacity alumina refinery expansion.
In March and April, China‘s alumina production reached a record 4.8 million tons, annual production is equivalent to 57.6 million tons and annual capacity is 60 million tons of alumina in China.
Analysts said that at least 2 million tons of new capacity put into production in May and June. Mostly all of aluminum smelters, which reduced their purchases of alumina.
Production increase will depress second–quarter domestic alumina prices, even with aluminum production capacity of about 2 million tons of new production.
Two tons of aluminium oxide is typically used to produce one ton of aluminum.
But Natixis commodity Research Director NicBrown said the alumina price falls may be a sign of China‘s aluminum production growth slowed.
Google+shareTwittertweetPinterestpin it
China alumina prices decreased more than 10%Aluminum smelter percentage of loss-incurring enterprises enlarge turnround is still struggling