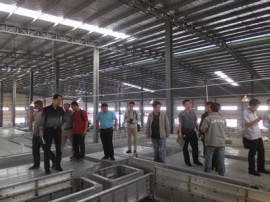 The chinalco net “top Chinese aluminum industry” campaign on the evaluation method and standard to continue the practice of last year, at the same time using the real-time update more transparent form of ranking, ranking changes every day can be clear at a glance, more respect facts and reflects the activities of the authenticity and integrity.

News on December 19, as ZhunDong speed up the pace of development of coal chemical industry area, industrial park of vigorous development, has become an important driving force to speed up the process of new industrialization. At present, the colorful bay area accumulated in more than 40 enterprises. Jimsar realize gross industrial output value of 33.4 billion this year, the industrial added value of 6.3 billion.

In xinjiang, its Asia aluminum electric co., LTD., in jimusar county to hire this year, there are currently more than 200 local staff working here. Company administration department minister He Tianpeng said: “we in xinjiang in 2014 its the electrolytic aluminium production capacity is 400000 tons, our entire output is $50, profit tax is 50 million, is expected to 2015 in March, the total production of 800000 tons, we we will output when the time comes to $100, profits of $10, so far, our xinjiang its staff of 3500 people, from 2014 onwards, we sign the employment agreement with the 21 colleges and universities in xinjiang, so to speak, is expected to next year we will increase to 5000 employees.”

The study makes full use of the aluminum alloy surface morphology of organic protective coating design and construct a collaborative anticorrosive wearing effect, play a 1 + 1 > 2 anticorrosive wearing effect; High stability, and the preparation process features simple operation, good repeatability, cheap raw material availability, low cost, and no limit to the shape of the base material, suitable for large-area surface treatment of aluminum alloy, has the very good application prospect.

The tariff implementation plan in 2015

On December 12, the state council tariff commission of the People’s Republic of China issued 2015 tariff implementation plan. The scheme through deliberated and adopted at the fifth plenary session, and submitted to the state council for approval, since January 1, 2015.

After sheng aluminum pinglu alumina project approved by the national development and reform commission (NDRC), since its construction, project received, yuncheng, pinglu county, Shanxi Province the great attention of leaders at all levels, project construction headquarters make full use of various resources, especially the use of the cayman aluminum platform, using the latest technology and equipment, enhance the level of alumina production process and safe energy conservation and emissions reduction, through the joint efforts of the design, construction and so on various contractors, October 9, 2014 start debugging, joint load on October 19, successful output qualified alumina products. Pinglu project put into production of alumina marks the jinjiang group nonferrous industry in the development of shanxi and opened a new chapter.

This year, zouping county in the aspect of improving industrial work at the same time, choose the main business, the key breakthrough, wade aluminium industry as our county next key sector of the industry. Constantly stretch extend the industry chain, in the “big” and do go hand in hand on the “strong”, realize the specialization, scale development steadily.

From the point of current status of development of the zouping county, wade aluminum industry development advantage is very outstanding. Annual output of 8 million tons of aluminum oxide, 3.66 million tons of electrolytic aluminum production capacity, the electrolytic aluminium production capacity of more than 1/10 of the country, in the province and even the whole country is a handful. More than 20 aluminium backbone enterprises, products cover industrial aluminum, buildings, aluminum and other fields, good market sales. Self-provided power plant as well as the spatial layout of relatively concentrated also let enterprise has the advantage of the cost of production. At present, the urgent need to solve is the aluminum processing enterprises homogeneity, horizontal development, terminal products less serious problems.

In northern guizhou found a large 33.77 million tons of bauxite

Southwest aluminum frame contract with safran company in 2009, the supply of pre-stretching board in July 2014 was the peak company production license and deliver the first batch of products. The airbus A380 is Europe’s airbus industry development and production of four engine, 550 super long-range wide-body jet, the A380 production is one of the largest passenger plane carrying, a big MAC air said. Southwest aluminum alloy thick plate for the first time for the airbus A380, to promote the brand image and expand abroad for southwest aluminium broad market is of great significance.

As electrolysis plant in xinjiang have put into production, the first seven months of the year, xinjiang aluminium output reached 2.275 million tons, has become the first big province aluminium production in China. China nonferrous metals industry association, honorary President of kang in the recently held in zhengzhou Midwest non-ferrous metal industry development on the BBS, said this marked the electrolytic aluminium production capacity to transfer speed up in the west and changed the ten kinds of non-ferrous metal yield big province of the top 10 ranking.

The project conforms to national industrial policies, development plan, access conditions, is currently the eia formalities, plan all front procedures fulfilled within the next year, construction began in 2015, was part of the production. Project, after all, will implement the annual sales revenue of 18.4 billion yuan, profit tax 2 billion yuan, the jobs of 2000 people. (chinalco net news center compiled)

On August 15, the fight dust explosion stipulated in article 5 of enterprises “in the form of national safety supervision bureau to release.

For deep draw in jiangsu kunshan “August 2” rong metal products co., LTD., special major explosion accident lesson, in depth analysis in recent years, on the basis of the similar accidents occurring in accordance with the “dust explosion-proof safety regulations” and other relevant standards and specifications, and national security supervision administration establish the dust explosion stipulated in article 5 of the fight enterprise “.

“Guangxi of ping guo aluminum to make”, China’s reform and opening up in 1986, deng xiaoping said of this sentence, promoting the vigorous development of the guangxi baise aluminum “industrial revolution”.

In the mid – 1980 – s, before this place for a long time in China KangFa, the more resistance to American aid and our self-defensive in front in the war until instructions of ping guo aluminum construction, deng xiaoping baise began to enter a new developmental stage.

On August 1st, sponsored by the chinalco’s network of 2014 year China aluminum industry “top ten manufacturers” selection activities after nearly a month’s preparation is about to begin. Activities will be lasted more than two months, the same rules, not the same as the results. Especially this year China’s aluminium processing industry development situation is not optimistic situation, 2014 aluminium industry “top ten manufacturers” selection is still held as scheduled, and will continue to promote the development of the aluminum processing enterprises enthusiasm, and everyone together through the selection activities to enhance confidence, do business, common witness the sustainable development of aluminum industry.

Chinalco announced, jinjiang group, with independent third party to enter into a joint venture agreement to jointly establish huajing aluminum, qingzhen alumina project construction and operation, in order to realize the guizhou branch alumina by a capacity shift, the two sides will invested 600 million yuan and 400 million yuan respectively, 60% and 40%.

Since 2010 “aluminum united mining coal mining license application. Due to a mine mining at the same time two kinds of resources in the country first, through years of unremitting efforts, Cao Yue mining eventually got the mining license. The approved, Cao Yue mining bauxite production scale of 360000 tons/year; Coal production scale of 300000 tons/year, underground mining, from February 2014 to December 2022.

Meters, Hector package, he said, the two countries are friendly neighbours, the Mongolian people’s party and the communist party of China has a good tradition of friendship. Mongolia is rich in resources, welcome Chinese enterprises with advanced technology and management experience to Mongolia for exploration, mining, etc. Zhao-xue sun, said China and Mongolia has long maintained friendly relations of cooperation, chinalco and Mongolia treasures in TT coal development has formed good cooperation mechanism, forged a deep friendship. China has the broad market, Mongolia is rich in resources, both sides have good basis of cooperation.

Chinalco has seven years of independent research and development, and included in the national 863 key projects in 2009-600000 a large capacity of aluminum electrolytic cell technology test project respectively by the national ministry of science and technology and the technical inspection of China nonferrous metals industry association and the scientific and technological achievements appraisal, the experts say, is the technology with independent intellectual property rights of the original energy-saving aluminum electrolytic technology, large capacity in line with the industry development planning, specification of the aluminium industry, is the support of the scientific development of aluminum industry in China, the landmark of major key technologies, the overall technology has reached the international leading level. This marked the chinalco in independent research and development and major breakthroughs were made in electrolytic aluminium technology.

To implement the “state council on guidance of dissolve the contradiction severe overcapacity, pushing electrolytic aluminium enterprises to carry out the work direct purchase of electricity, the national development and reform commission industrial department and the ministry of industry and information technology department of raw materials on February 18, electrolytic aluminium enterprises was held in Beijing organized work forum direct purchase of electricity.